Silvio Rech and Lesley Carstens have spent the past 20 years developing a hand-crafted haute couture body of work in Africa. Where possible, their design philosophy has been to live onsite (in many instances in exotic locations such as North Island in the Seychelles), managing one project at a time by developing and creating a total design: a new language of architecture and lifestyle specific for that location. 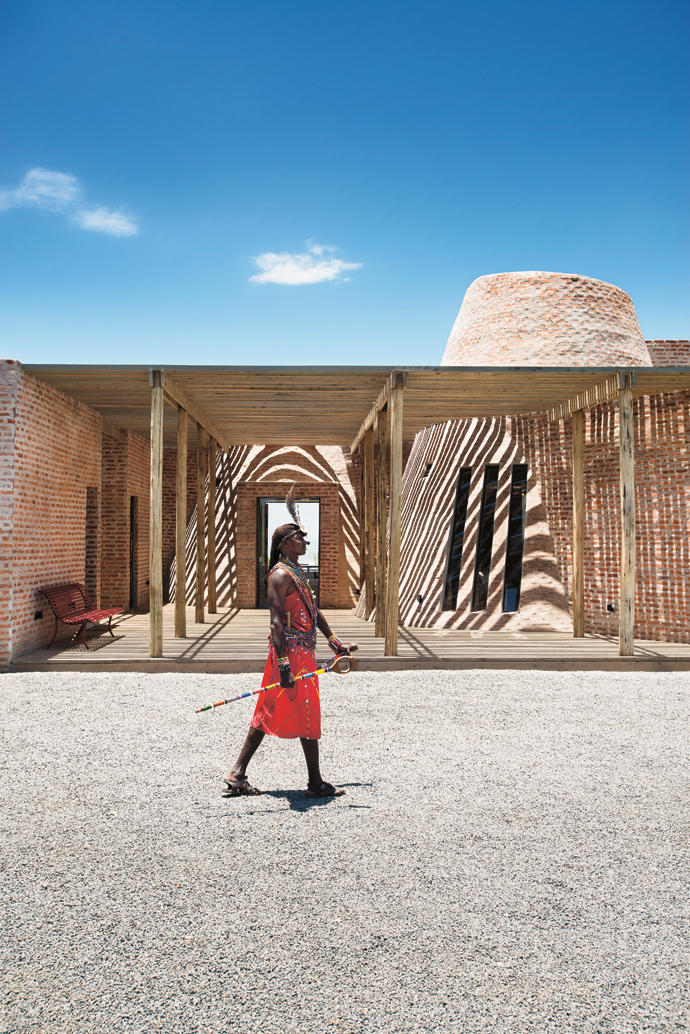 Angama Mara is their fifth collaborative project with Steve and Nicky Fitzgerald, following Ngorongoro Crater Lodge, Grumeti River Camp and Maji Moto Tented Camp in Tanzania, and South Africa’s Makalali Bush Camp.  With the Angama Lodge, the goal was to find a balance between creative madness, a fresh approach to lodge design and a distinctive look – all the while staying true to what guests expect when going on safari in Africa. In the middle of it all, was the inimitable Lesley Fox who simply just made it all happen. 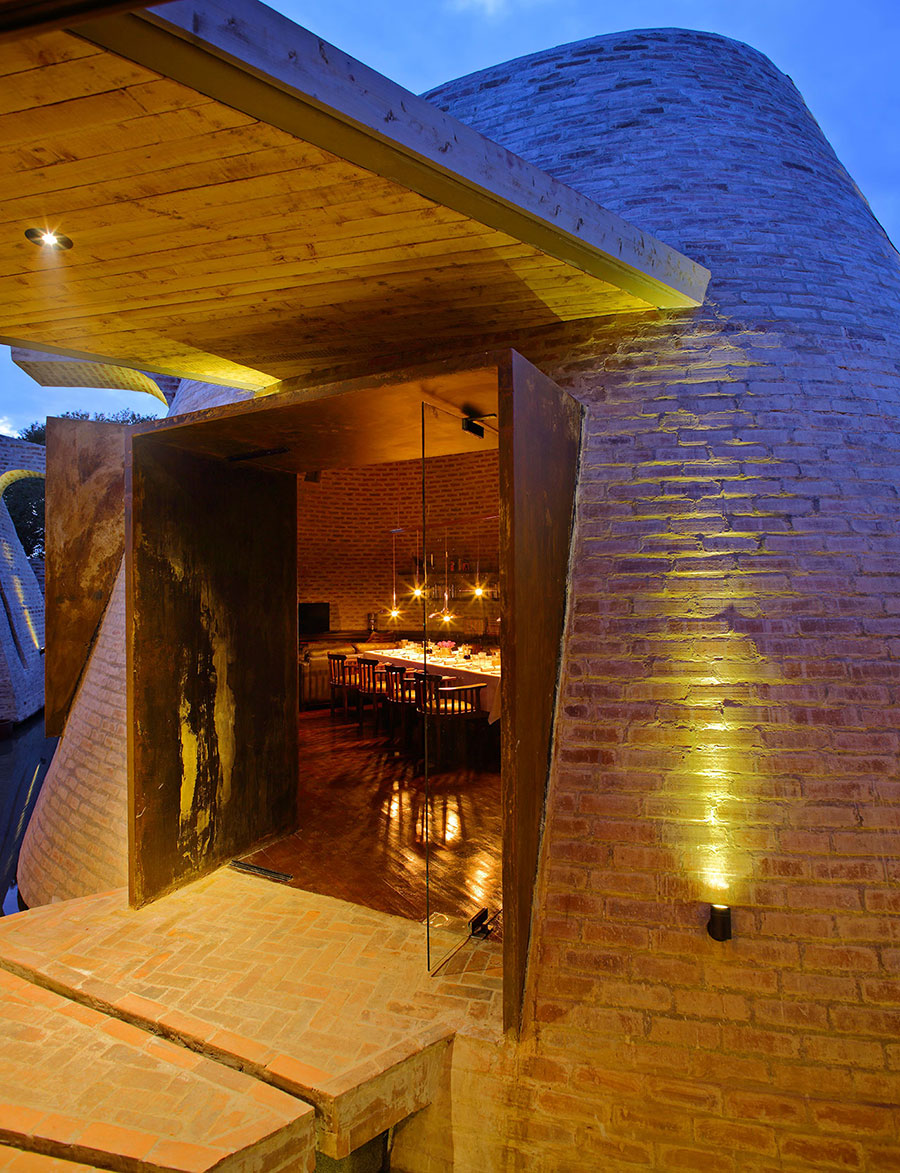 For 15 years, my husband Steve and I had longed to own this remarkable piece of land on the edge of the Great Rift Valley, overlooking Kenya’s abundant Maasai Mara National Reserve, the very place where Out of Africa was filmed 30 years ago. After building, opening and running more than 60 safari lodges across Sub-Saharan Africa and four lodges in India’s jungles, we felt that all the roads in our lives had led us to this piece of land where the views almost stop your heart.

We had just more than a year-and-a-half in which to find a name, design the corporate identity, appoint an architect, decide on how we were going to tackle the interiors, choose the best contractors, pick the very best tent maker on the continent, appoint and train staff, and greet our first guests before the 2015 high season. Twenty years ago we built Tanzania’s renowned Ngorongoro Crater Lodge in collaboration with architects Silvio Rech and Leslie Carstens. 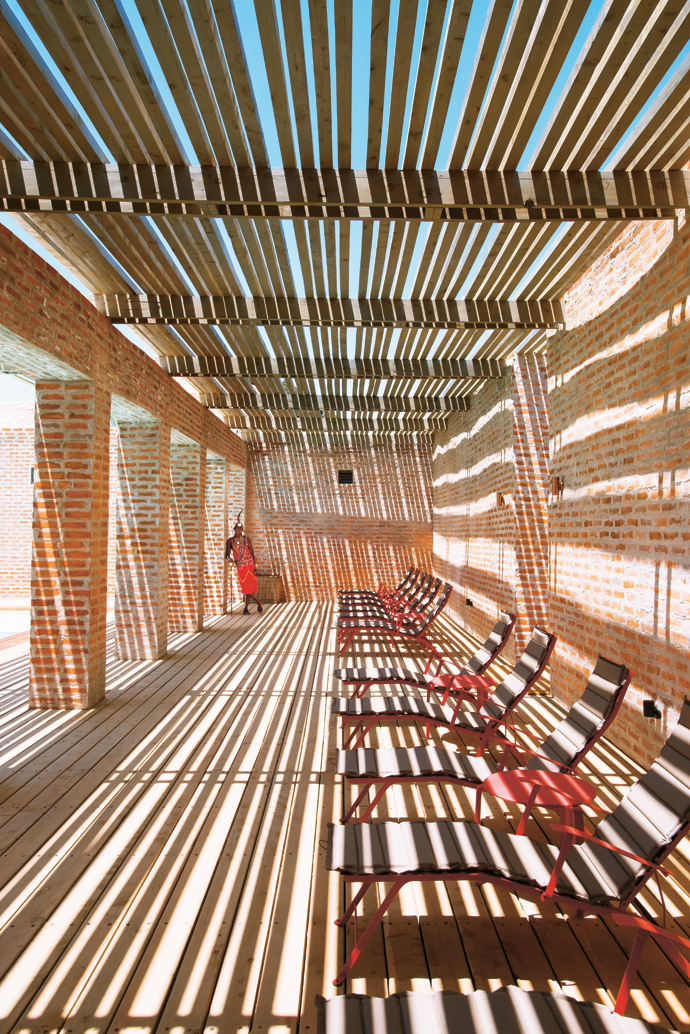 We didn’t hesitate to work with them again on Angama Mara. They understand the theatre that a location like this in remote Africa demands. There is that same tension between contemporary and classic design in both the guest tents and the guest areas. The tents are beautifully proportioned, with 11 m floor-to-ceiling windows and minimal detailing, allowing the hand-crafted John Vogel furniture and the views to do all the work. 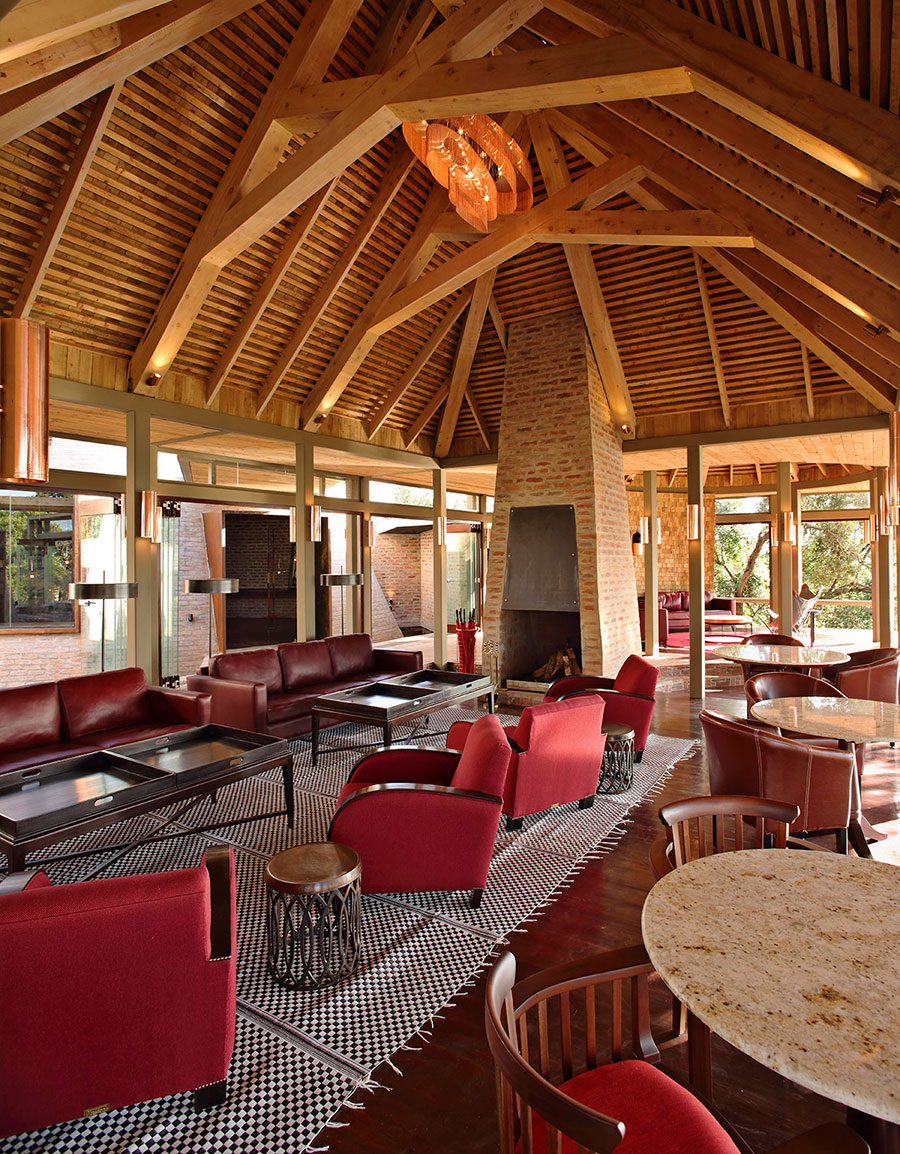 Designing the guest areas in a lodge is always the hard part – they should not be too spacious so guests rattle around but not too small either. Silvio and Les took their inspiration from the typical veranda-wrapped homes of colonial Kenya in the 1920s and designed one large room wrapped on all four sides by glass stacking doors, broken up by floor-level changes, internal colonnades and distinctive shingle-clad roof spaces. Out front, it’s all about the view. And at night the building, which appears to float on a lily pond, looks out onto softly lit Maasai brickwork. 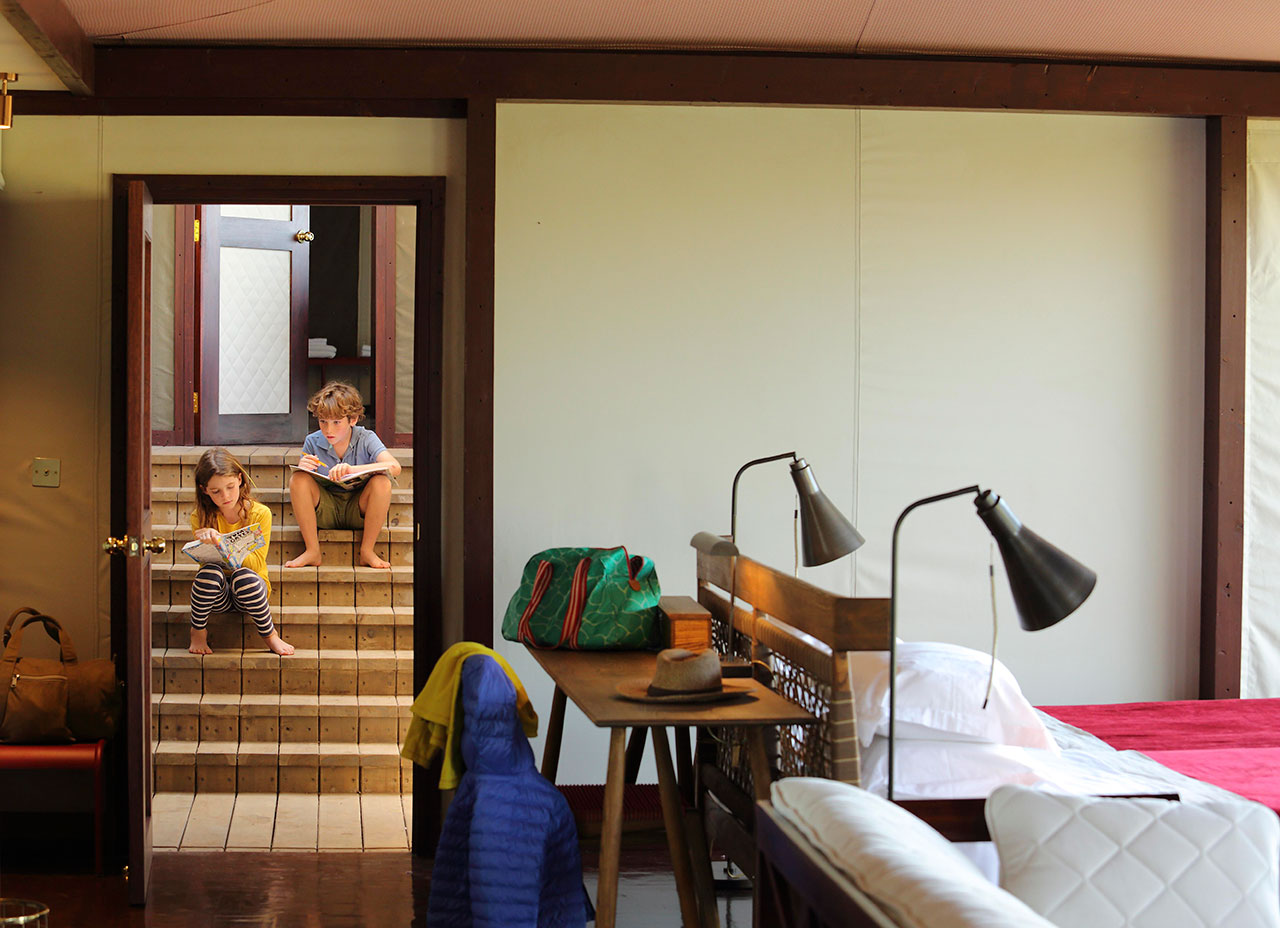 For the interiors, Annemarie Meintjes guided, inspired and often bullied us, but in the gentlest way. Her brief was strict: no scatter cushions, no layers and no frippery anywhere. The French Fermob outdoor furniture used throughout is a safari first, and the Vogel furniture aced the Maasai character. The creation of Angama Mara was our quest to find the perfect balance between delighting guests, making them feel comfortable and safe, and surprising them. All luxury adventure travellers in East Africa are on a journey and stay in three or four high-end lodges or mobile safari camps. Each destination should have its own distinctive signature that imbues a deep sense of place. 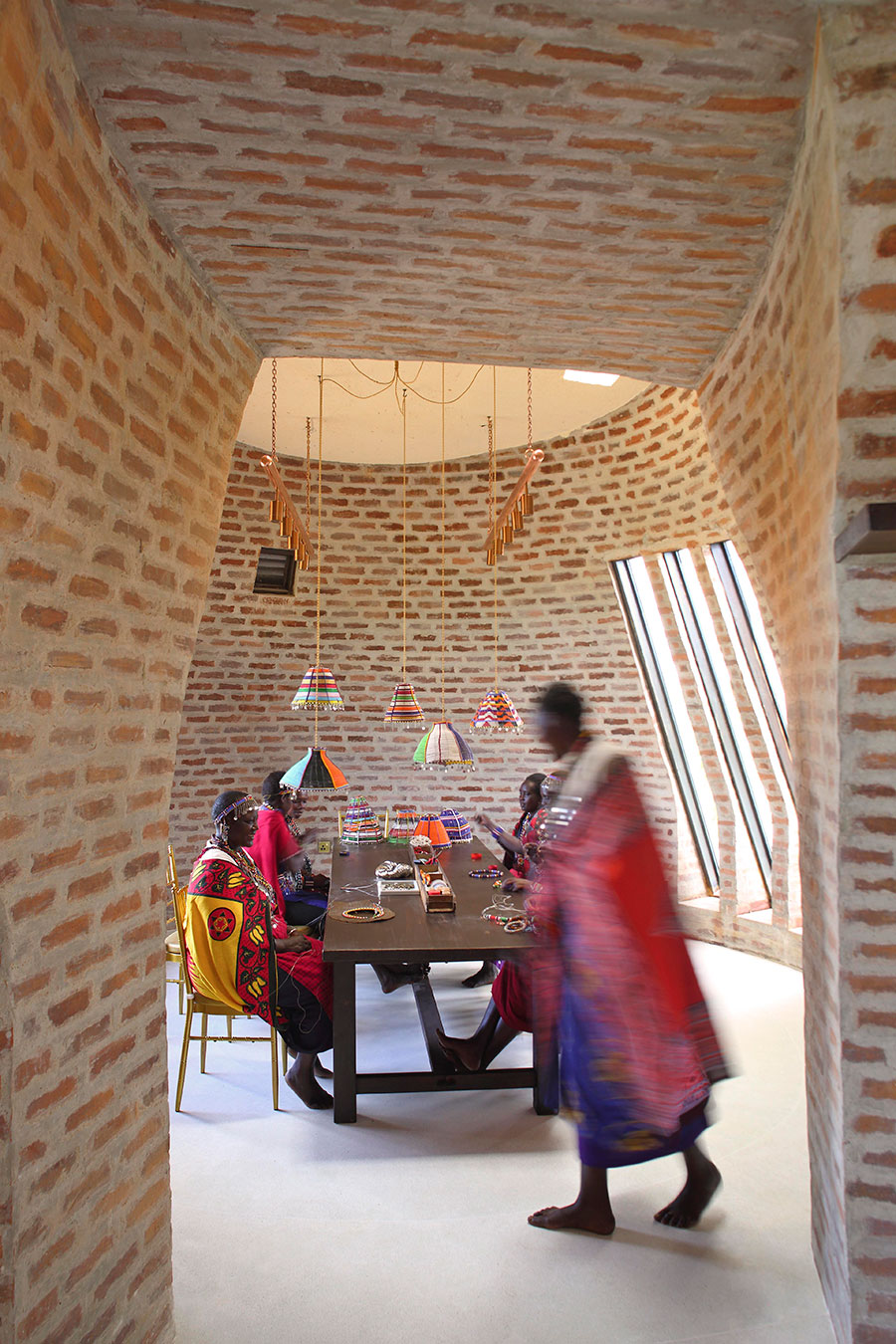 The Swahili word “angama” means to be suspended or hanging in mid-air, which is what it feels like up here, 300 m above the Mara Triangle, eye to eye with raptors and the hot-air balloons that sail past each morning at dawn.