Joe Osae-Addo, a highly gregarious, Ghanaian-born architect, was living in Los Angeles, designing buildings and acting as the unofficial social coordinator of the local architecture scene. But on a visit to Ghana in 2000 he ran into, and subsequently fell in love with, Sara Asafu-Adjaye, an old high-school classmate who was living in London. The two embarked on a long-distance relationship, and before long Osae-Addo sprang a surprise on Asafu-Adjaye: He suggested they build a house together on a piece of land given to him by his mother in his native Accra, the capital of the West African nation. “We wanted to build something to cement our relationship,” Osae-Addo recalls. “I didn’t have the money,” says Asafu-Adjaye, “so Joe said he’d build it and I could have some intellectual property.” 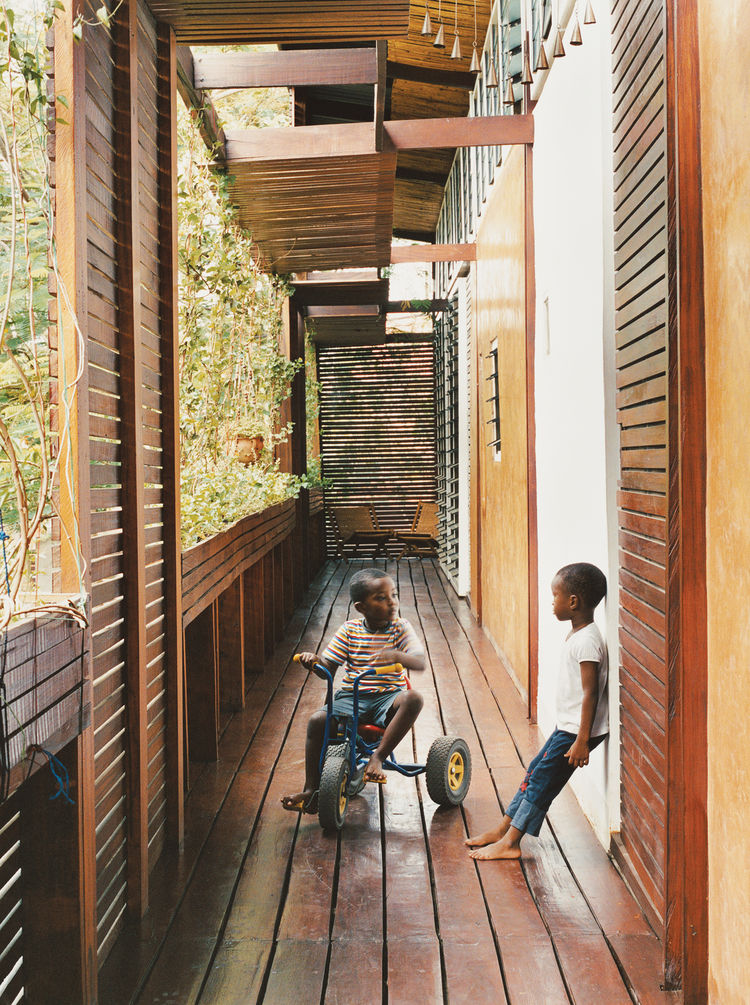 Osae-Addo threw himself into designing a home that would come to be a test for—and testimony to—their new life as a couple. With a passion for the contextual modernism of Finland’s Alvar Aalto, Australia’s Glenn Murcutt, and L.A.’s Ray Kappe, he sought to apply their lessons to Ghana, a onetime British colony where unfortunate concrete-block houses made with imported English portland cement have become the urban norm. “Interstitial spaces and landscape are what defines tropical architecture,” he says. “It is not about edifice but rather harnessing the elements—trees, wind, sun, and water—to create harmony, not the perfection that modernism craves so much.” 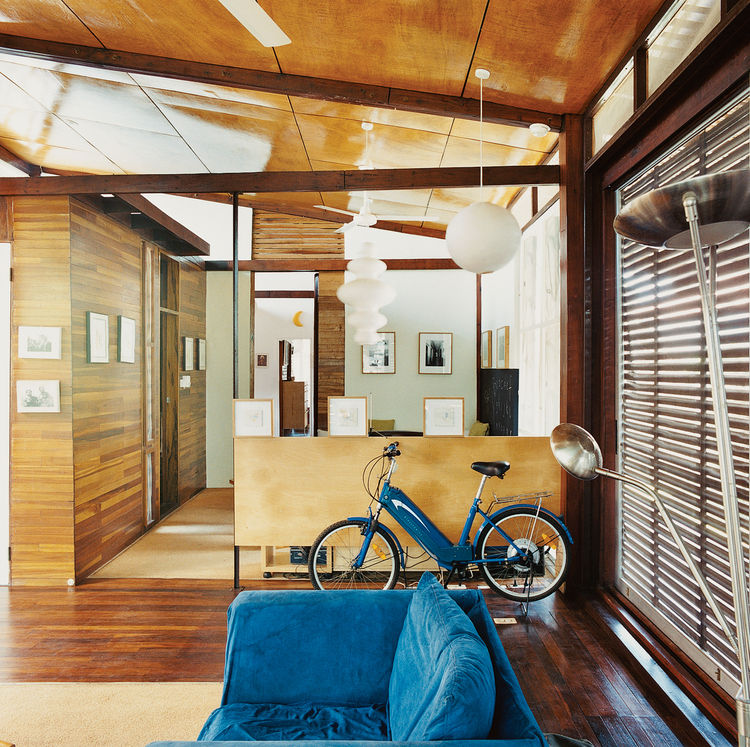 Unhappy with Accra’s concrete-block houses, the architect was determined to build with the materials found primarily in rural areas: timber and adobe mud blocks. “Adobe mud block doesn’t exist in cities in Ghana, which meant I had to create it,” says Osae-Addo. Furthermore, he didn’t want air-conditioning in a climate where the average temperature can approach 90 degrees, with humidity exceeding 90 percent (an idea that didn’t immediately fly with his soon-to-be wife). 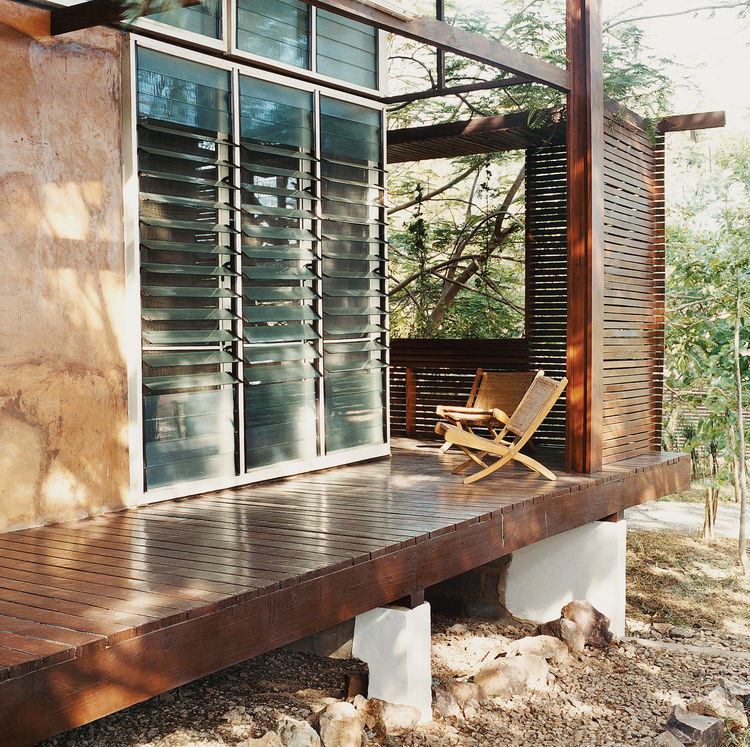 The pair designed their house long-distance: Osae-Addo built models and sketched designs in his L.A. studio and emailed his ideas to his fiancée in London. She would reply with pragmatic considerations. “Initially I didn’t want a corridor between the two rooms [parents’ and child’s bedrooms],” recalls Osae-Addo, “and Sara said, ‘Hell, no, we have to be able to reach the kid.’” (Their son Kwaku was born in 2003.) Asafu-Adjaye remembers her skepticism during the design process: “I knew it would look good, but I didn’t know if it would work.” 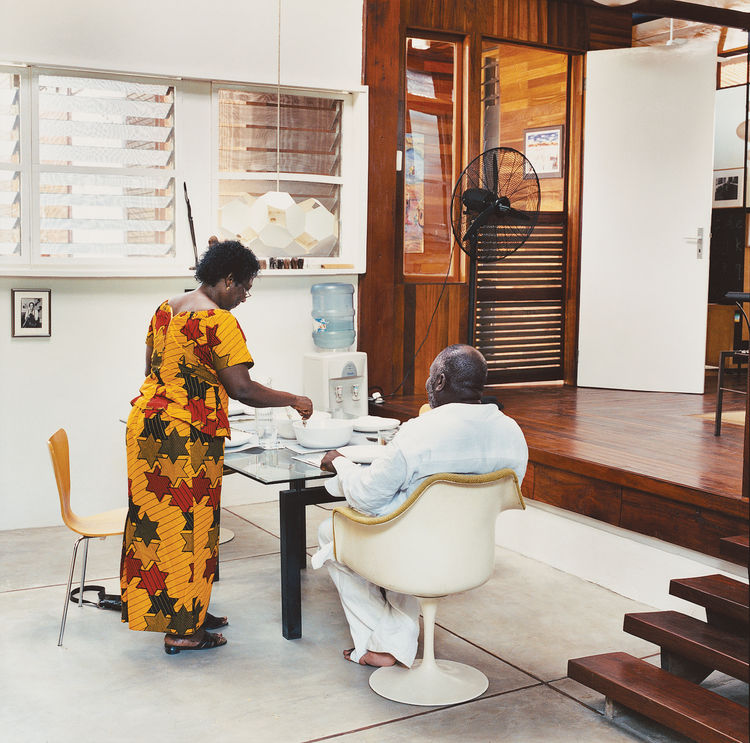 “I wanted to explore ideas of light, cross ventilation, and lightness of structure,” Osae-Addo says of their one-story, 2,500-square-foot house. Arranged in an L-shape, with bedrooms and TV room in one wing and the kitchen and dining areas in the other, the house has a balcony wrapping around it, inspired by both colonial English bungalows and the courtyard plans of rural Ghanaian houses. “There are no internal corridors,” Osae-Addo says, “so rooms extend from one wall to the opposite wall, allowing for free flow of light and air. We are always moving from room to room. It’s a very intimate house.”

The design follows the “no air-conditioning” philosophy by raising the structure three feet off the ground on a wooden deck to take advantage of cooling under-floor breezes. For cross ventilation, the house has sliding slatted-wood screens that neighbors thought were crazy in the damp, hot climate, and floor-to-ceiling jalousie windows. The project was not without its challenges, including, Osae-Addo says, “the limitations of labor, availability of materials, environmental conditions, and being ready to adapt the original design.” He continues, “There was a temptation to give up on the original concept of adobe, because of the difficulty in making it ourselves. We achieved the near impossible of taking a relatively unskilled labor force and inspiring them to think differently and be open to new possibilities.” Though the house is on the grid, solar panels provide   backup power for lighting and heating water, and deep timber overhangs provide ample shade. 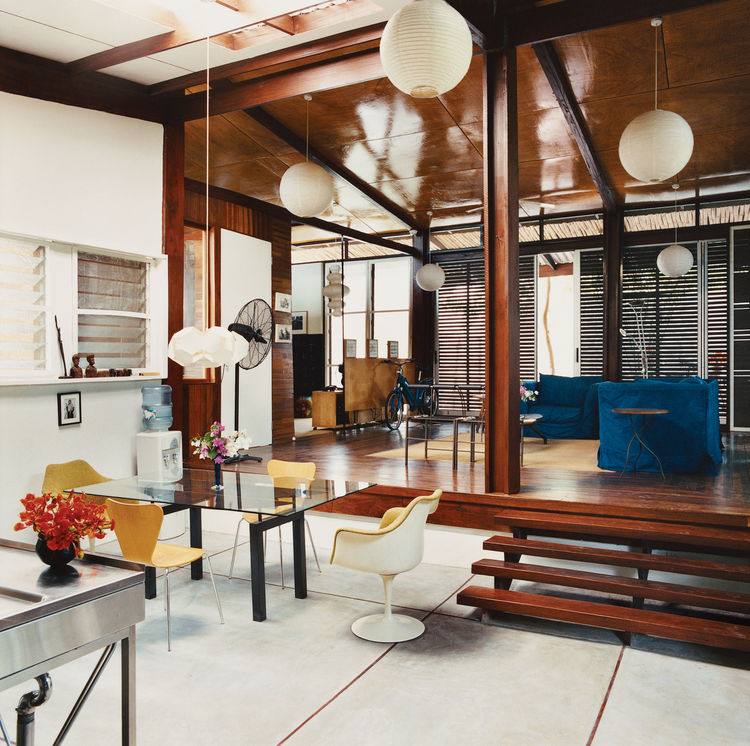 Construction began in 2003 while the couple was visiting Accra, and was finally completed in the fall of 2004; Osae-Addo, Asafu-Adjaye, and their young son moved into the house just before its completion. Osae-Addo has found so many design opportunities in Ghana that he’s left L.A. behind—but he also brought a slice of California with him. “We moved L.A. straight into this house—from our bed to our sofas to our TVs,” says Osae-Addo. “We have American appliances and equipment, including a complete Bulthaup kitchen that I’d bought while in L.A. and stored in my basement.” They love the juxtaposition of the mud house and Bulthaup kitchen, amusedly pointing out that a new one would cost more than the reasonable $50,000 required for the entire house.

But does it work? Even Asafu-Adjaye says yes, the house stays cool. “Sara had to eat her words,” says Osae-Addo. Shade trees also help, as does the lush garden that has grown on what was once a piece of arid, uninviting land. Asafu-Adjaye now says that the house is “so comfortable and easy to live in, I don’t like to go out.” Her husband has coined a phrase for his approach to contextual modern architecture: “inno-native,” and it’s an approach he is trying to apply to condo projects and low-cost housing elsewhere across Ghana. “We must lead by example,” he says. With a burgeoning practice in Accra, and a smartly built abode of his own, Osae-Addo has the chance to do just that. 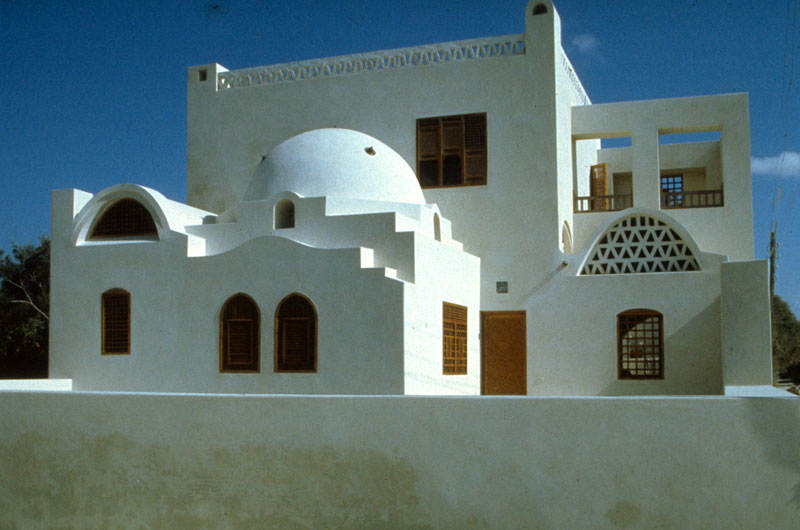