Located in the coastal curve of West Africa, Equatorial Guinea includes several small offshore islands and an insular region containing Annobon and Bioko islands. Malabo is the capital and the second largest city of Equatorial Guinea, located on the northern coast of Bioko Island.

Equatorial Guinea's long-ruling leader, Teodoro Obiang Nguema Mbasogo, who had been struck two years earlier by the luminous hall that Tabanlıoğlu Architects designed for Tripoli, Libya, when it hosted the Assembly, asked the firm to create a similarly impressive structure for the Union's meetings in his country. 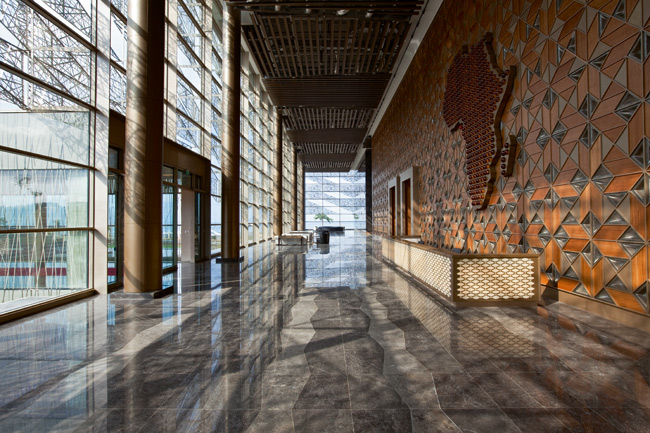 Murat Tabanlıoğlu says his Istanbul-based firm used the challenge to design “a showcase” for Equatorial Guinea as an opportunity to promote peace and development across Africa. 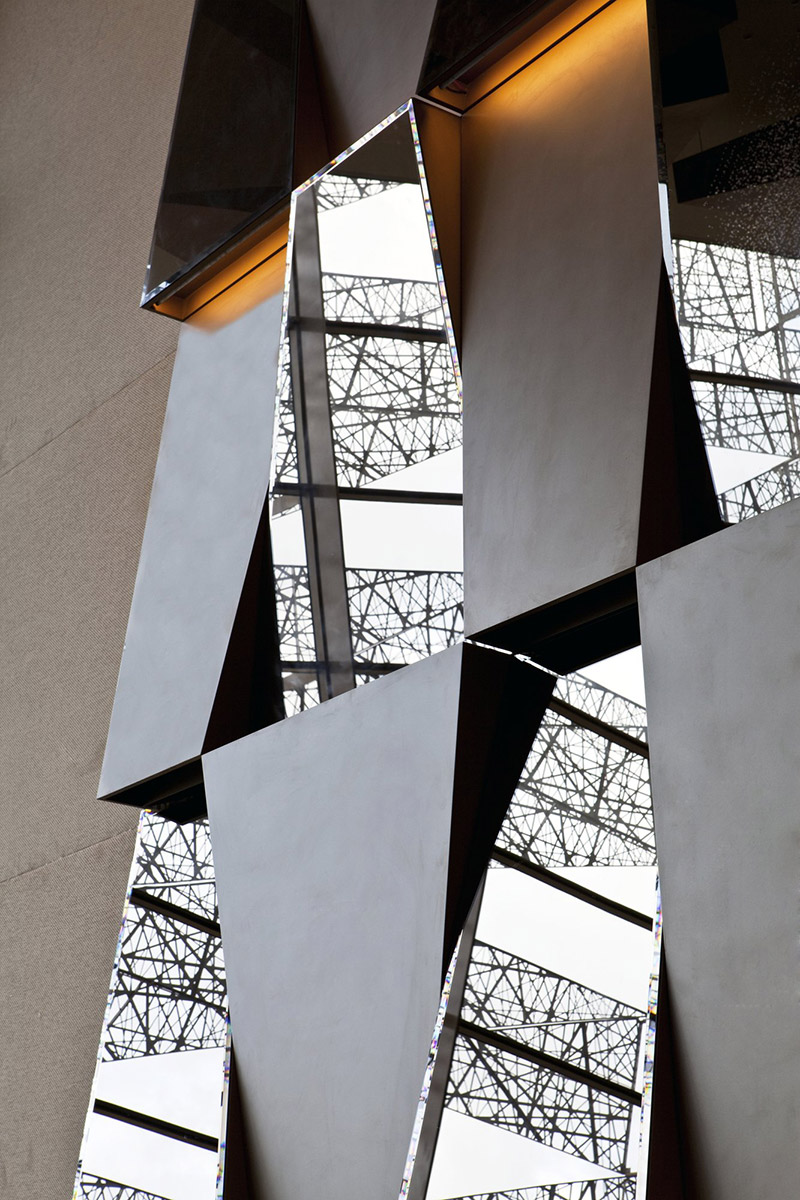 “We were aiming to create a scene for negotiations and peace among many countries,” he says. “Nature and harmony were the elemental inspirations for the building.”

From the Architect:
The rectangular  two-storey block is nested in a semi-transparent metal envelope as a shield protecting from strong lights and create an implication of security, protecting the interiors from sharp sun beams yet benefiting the daylight at optimum. 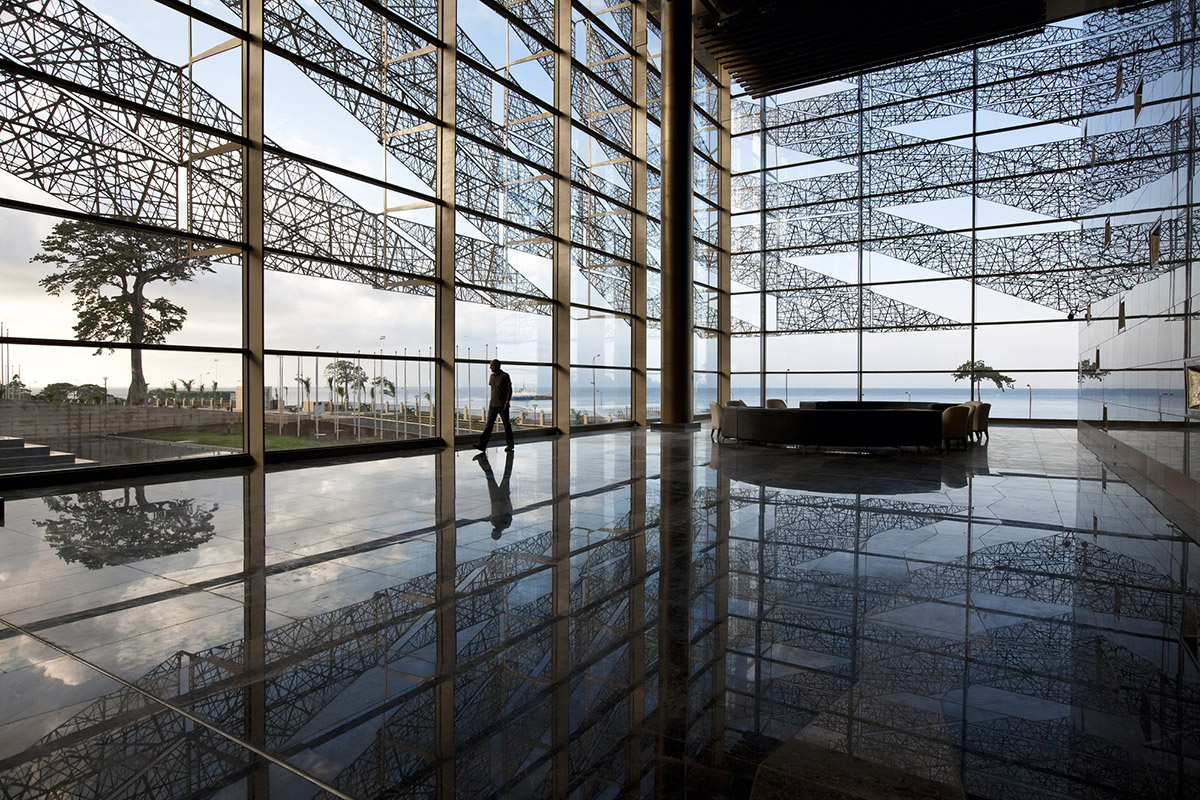 The lacy texture of the mesh behaves like sun-break and grants a shady interior without hindering the accent of transparency. The building with its elegant veil visually merges to the ocean and the surrounding greenery in serenity, reflecting the beauty of the surroundings. 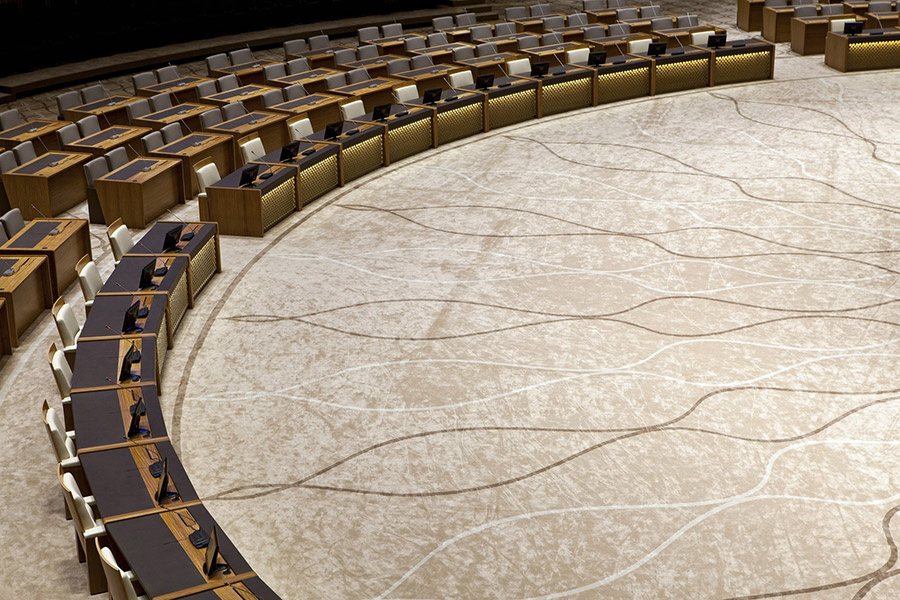 Encircled and harmonized with the green woods and the blue ocean, mirroring the nature on the building’s uninterrupted sheer glass walls, the gray-bronze mesh follows the color of the tree trunks and the existing Conference Hall materialized in solid travertine. Through the placement of metal panels in variations at different levels and angles, the façade is perceived as an assortment of playful geometries glittering with day light, echoing not only the colors and tones but also the motions of the winds and waves.